Connecting Past and Present 401 Years Later

Old Québec is more than a protected historic district, it’s a piece of history that spans across North America. This is where Samuel de Champlain settled and where France made a play for the colonization of a continent; where the first woman, Marie Rollet, along with her husband Louis Hébert and their three children became the first family to settle in 1617.

And this is where Marie Rollet and Louis Hébert’s descendants, Rita Daley and her daughters Paula Daley and Michelle Archambault, arrived 401 years later to learn about their French Canadian roots. 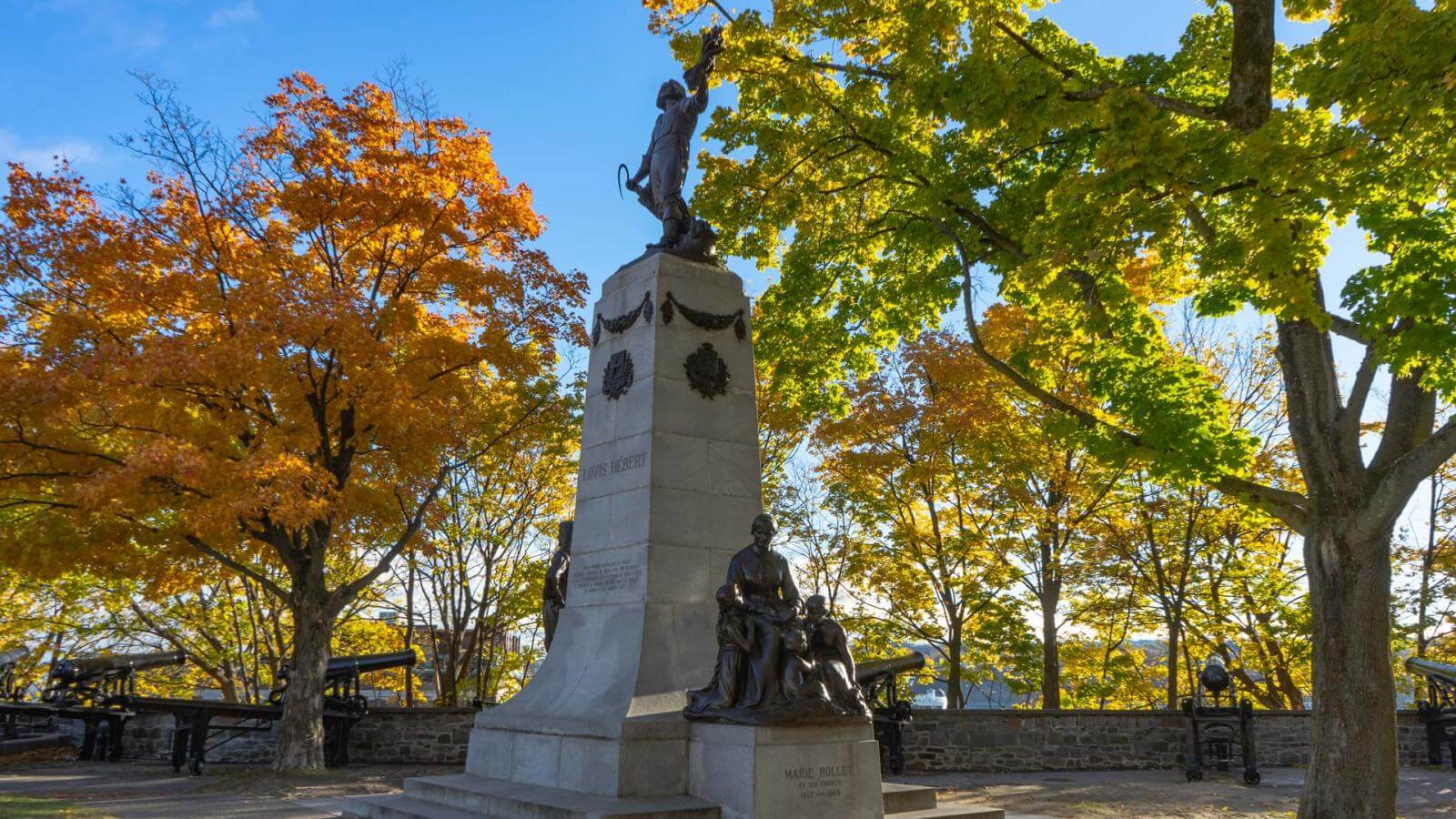 Paula’s decision to participate in Jean-Pierre Gendreau-Hétu’s Québec mtDNA Project, which traces ancestry through the matriarchal line, resulted in a DNA matched to Marie Rollet, and her husband, Louis Hébert. Learning of the Daley genetic connection to some of Québec City’s historical figures, making the decision to visit Québec City, the home of their famous ancestors, was an easy one for Paula to make.

Considered the first family of New France (from which Québec City was the capital), Louis Hébert was an apothecary and the first farmer in the colony. Marie Rollet was an educated woman who could read and write and managed the family’s affairs prior to coming to New France (when Louis was away). Marie was a woman with tremendous strength, both physically and emotionally. When Louis died from a fall 10 years after their arrival, Marie and her children remained in New France. 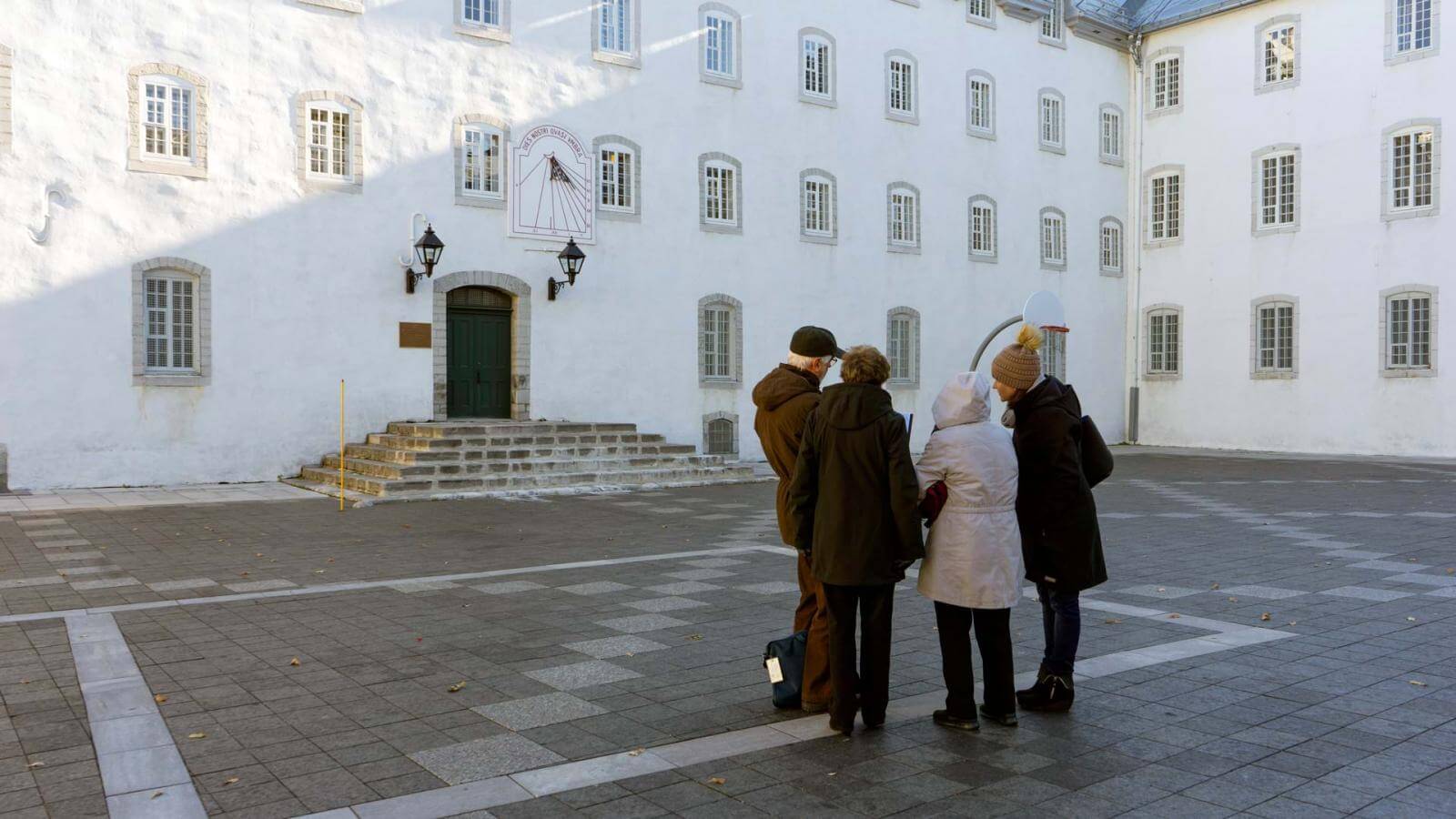 Their trip began with a visit to Séminaire de Québec to see the quadrilateral marking in the courtyard which signifies the site of Louis Hébert and Marie Rollet’s first home in New France (circa 1620). It is here that they had the opportunity to meet Mr. William Moss, Chief Archaeologist of Québec City, who spoke of the dig he conducted, the structure of the Hébert-Rollet home and the artefacts carefully extracted from the earth.

Mrs. Daley and her daughters listened intently and within minutes the quadrilateral marking became a piece of living history. Standing within the square, it was easy to envision the small home with its whitewashed walls, a warm hearth in the corner and the laughter of children.

Holding a Piece of History 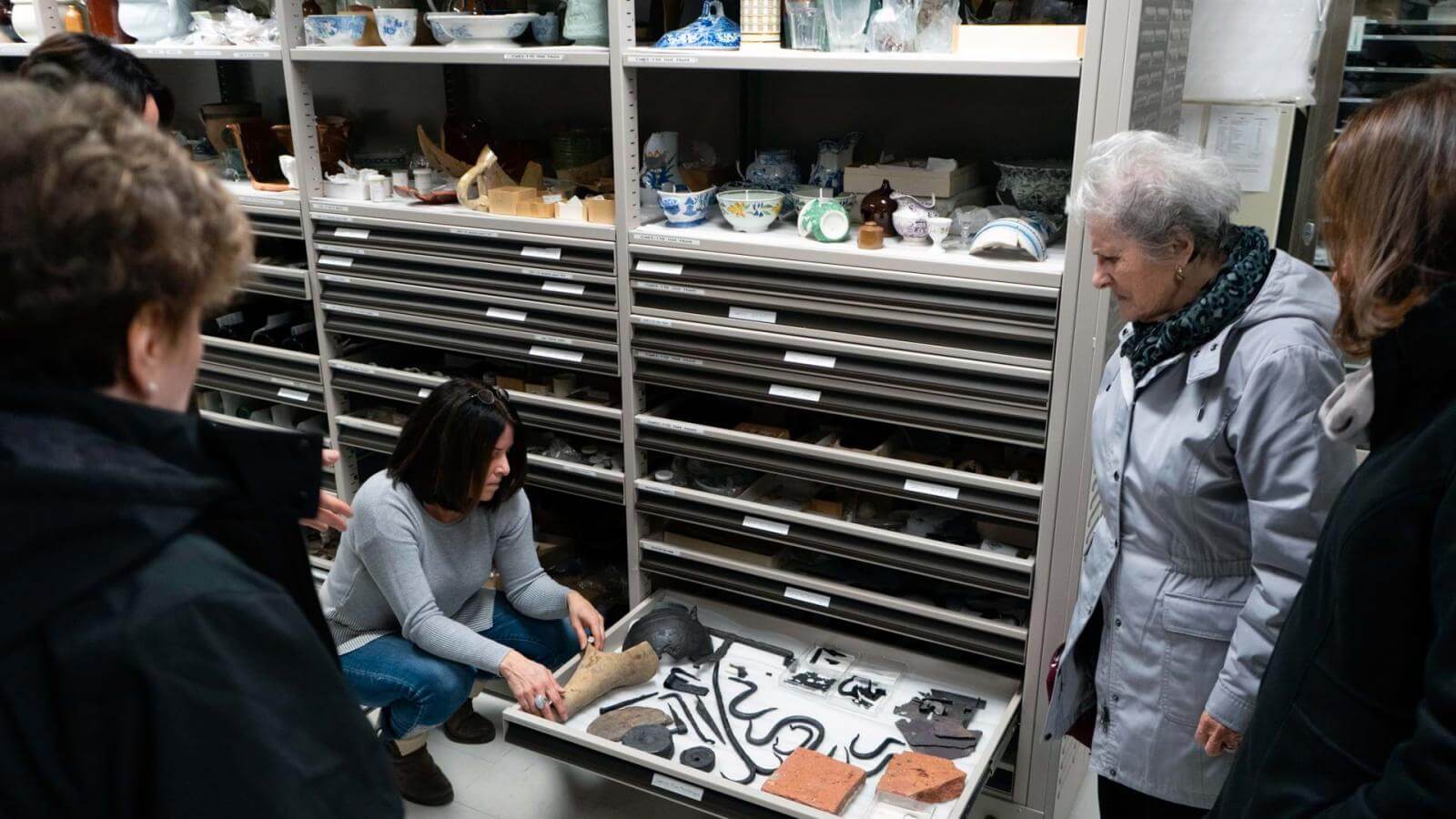 Open to the public every August during the Archaeology Month event, the repository is a guardian of the past, home to thousands of historical relics, including several pieces belonging to Louis Hébert and Marie Rollet. It is here that Mrs. Daley and her daughters, accompanied by Mr. Moss and local archaeologists, stoop over drawers filled with artefacts unearthed at the site of the Hébert-Rollet home, a coin of Marie Rollet, glass beads likely made by Champlain’s adopted Indigenous daughters, clips, and apothecary weights. One by one, artefacts are gently taken from the drawer and shown to Mrs. Daley, Paula and Michelle, further amplifying Mr. Moss’ description of the Hébert-Rollet home. It’s a special moment shared by all. For Mrs. Daley and her daughters, they are seeing first-hand artefacts that belonged to their ancestors 400 years ago. For the archaeologists, they are witnessing a tangible human connection to the artefacts they have spent hours unearthing and restoring.

Mrs. Daley, Paula and Michelle are living history in Québec City in ways they had never anticipated. 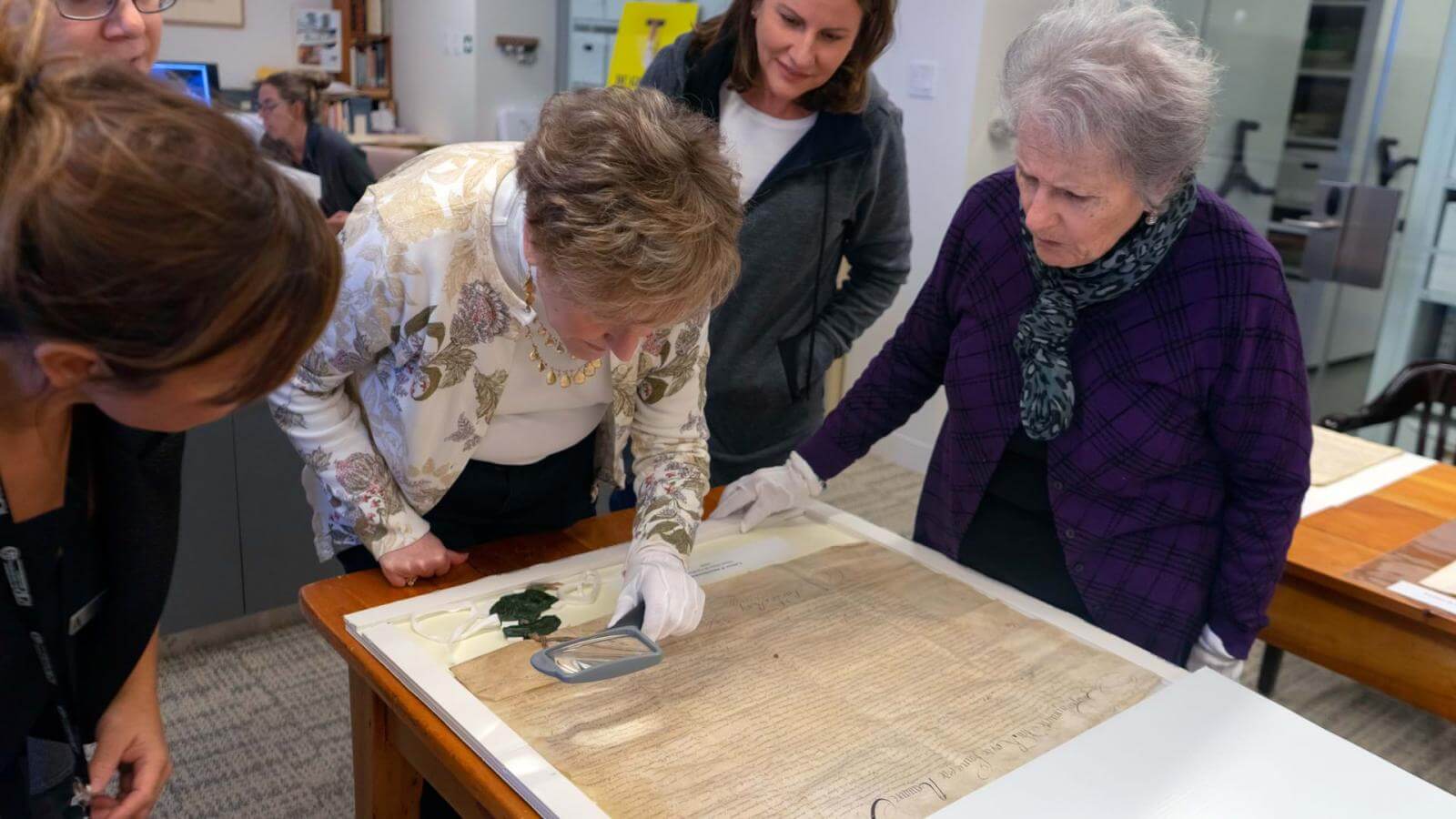 The following morning, they venture to the Monastère des Augustines to visit the archives, as well as the apothecary section of their museum. The Augustinian sisters arrived in 1639, 12 years after Louis’ death, on a medical mission and established Québec’s first hospital, Hôtel-Dieu de Québec, which is still in operation today.

It is within the quiet walls of the archives that a land document regarding Louis Hébert and Marie Rollet has been laid out, a pair of white gloves resting on the table beside it. Seeing a 17th-century document addressed to an ancestor is similar to striking gold in the genealogical world. Now, imagine the feelings of excitement and wonder that filled Mrs. Daley, Paula and Michelle as they were presented with a 17th-century document from King Louis XIV, complete with royal seal, making several mentions of Guillemette Hébert (daughter of Louis Hébert and Marie Rollet) and Guillaume Couillard.

Experiencing the Love of Distant Cousins 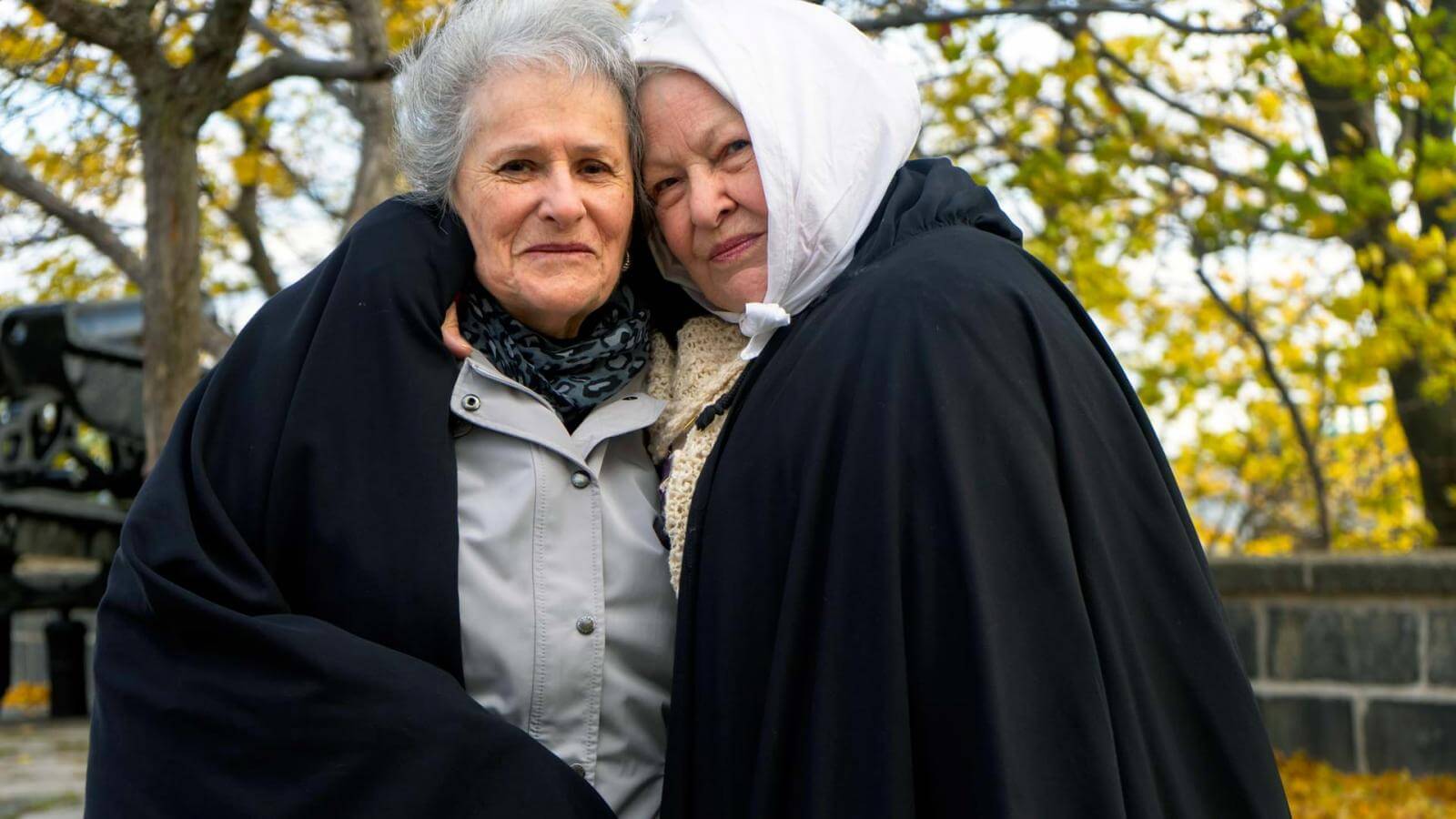 Embracing tightly, to anyone passing by, the greeting between Rita Daley and Jacqueline Asselin would be that of close friends, not that of distant relations (by a few hundred years!) who had learned of each other in recent months and were meeting for the very first time.

Both confirmed as descendants of Marie Rollet through a genetic genealogy project, Mrs. Daley and Ms. Asselin are similar in height, as well as facial features. The excitement, especially that of Ms. Asselin, is palpable, and as we walk around the monument of Louis Hébert, Marie Rollet and Guillaume Couillard in Parc Montmorency, Mrs. Daley and Ms. Asselin remain off to the side. Switching between French and English, the two distant cousins talk about everything from Ms. Asselin’s costume (dressed as Marie Rollet) to their connection to New France’s first familial settlers. They hold hands, take photos together and embrace. 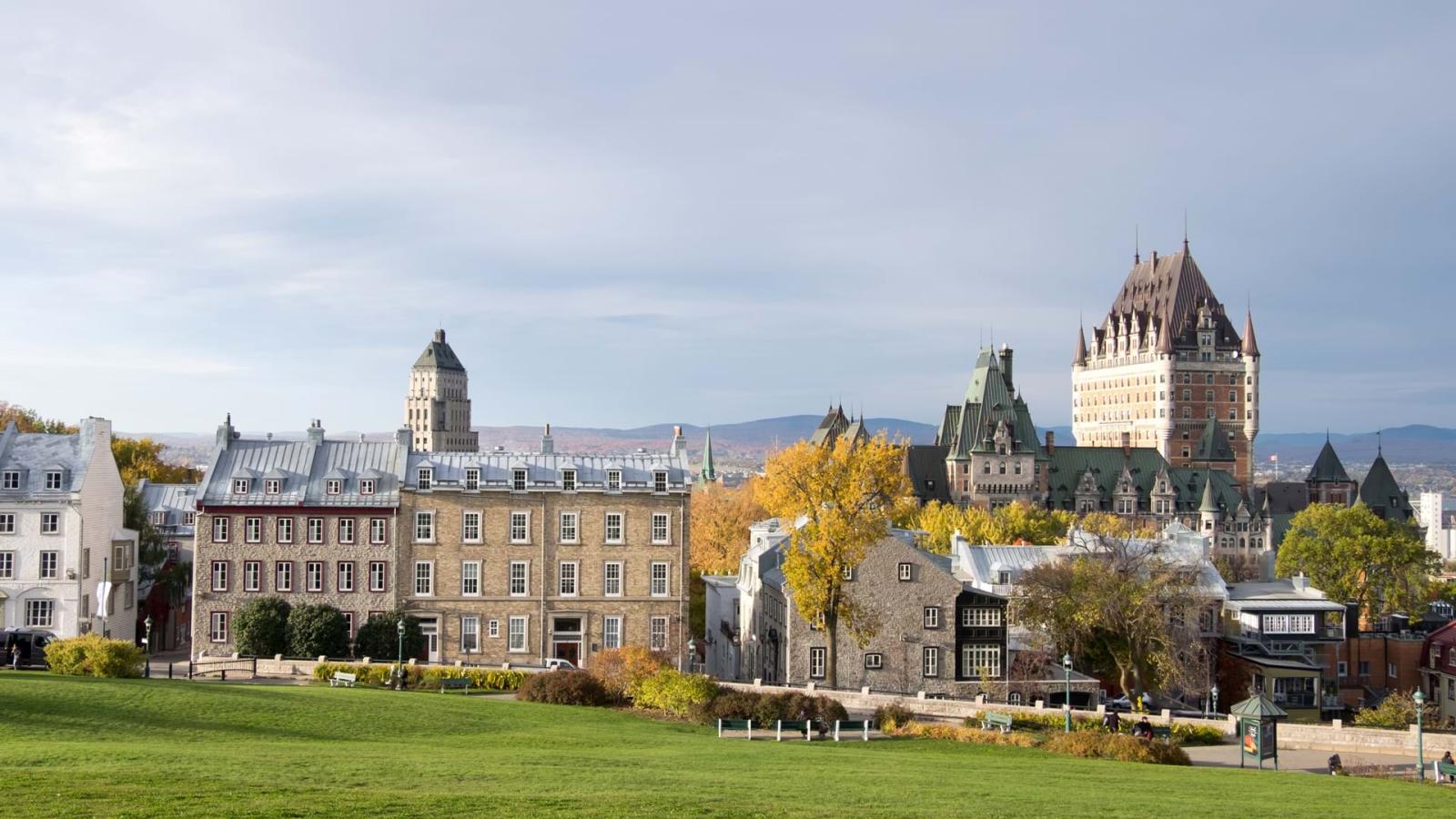 Québec City is rich with history, artefacts and documents – all of which make the search for French Canadian ancestry relatively straightforward. Searching records online through the Monastère des Augustines and sites like PRDH are highly recommended, and, of course, so is a trip to Québec City.

There is nothing quite like the feeling of connection, the sense of place that can occur when tracing our family history and walking where ancestors once walked. A visit to Québec City truly is an opportunity to experience living history. Take time to search for the homes of ancestors, accept an invitation to meet a distant cousin, snuggle up in an archive room. You will not only discover things about your ancestors, but you will discover things about yourself as well.